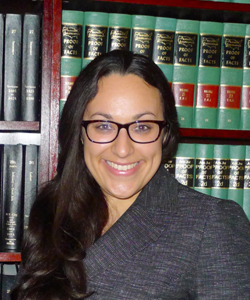 Attorney, Allyson D. Burger is a partner at the firm. Ally graduated cum laude from Lehigh University in 2004, where she was inducted into the Phi Sigma Pi National Honor Society. She then obtained her J.D. from Cardozo School of Law, where she concentrated in Family and Matrimonial Law as well as General Litigation. While at Cardozo, Ally also participated in the Family Court Clinic with a placement at Lawyers for Children. She was also a member of Cardozo Advocates for Battered Women. Ally has been selected as a New York Metro Area Super Lawyers 'Rising Star' in family law since 2014.

Ally has previously worked for several well-known boutique matrimonial firms in Manhattan and on Long Island assisting in all aspects of matrimonial and family law including high net worth cases and on father's rights, domestic violence and same-sex relationship issues.  Ally focuses her practice on family law. She is is a member of  several bar associations on the national, state, and local levels and is active in the Anti-Defamation League.  Ally has also been published as an author in the New York State Bar Association's Family Law Review, the NYSBA General Practice Section's 'One on One' newsletter as well as by the ABA Young Lawyers Division.  She has attended the American Academy of Matrimonial Lawyers Associate Institute in Chicago for 2015.

Ally has also authored materials for and presented to the New York Family Law American Inn of Court, has served as a panel lecturer for the Nassau County Bar Association's Academy of Law, and was past-Editor of the ABA's  Young Lawyers Division 'Children and The Law Committee' Newsletter. She was selected to moderate and prepare the materials for “Left Behind: Deportation and the Rise of US-Born Children in Foster Care' at the 2016 ABA Spring Conference in St. Louis, Missouri. As Chair of the ABA YLD Family Law Committee, she moderated a program during the ABA YLD Fall 2016 Conference in Detroit, Michigan, co-sponsored  with the ABA YLD Sexual Orientation and Gender Identity Committee and ABA YLD Tax Committee, and entitled “LGBT Family Law Considerations and Practice Tips.” Ally also serves on several Committees of the New York State Bar Association Family Law Section. In May 2017, Ally was in Montreal, co-moderating/co-sponsoring/co-planning a program entitled “So You Wanna Adopt: The Need, The Process, and the Benefits” for the American Bar Association Young Lawyers Division Spring Conference. She remains a strong advocate for equal justice for all across gender, religious, racial, and ethnic divides.